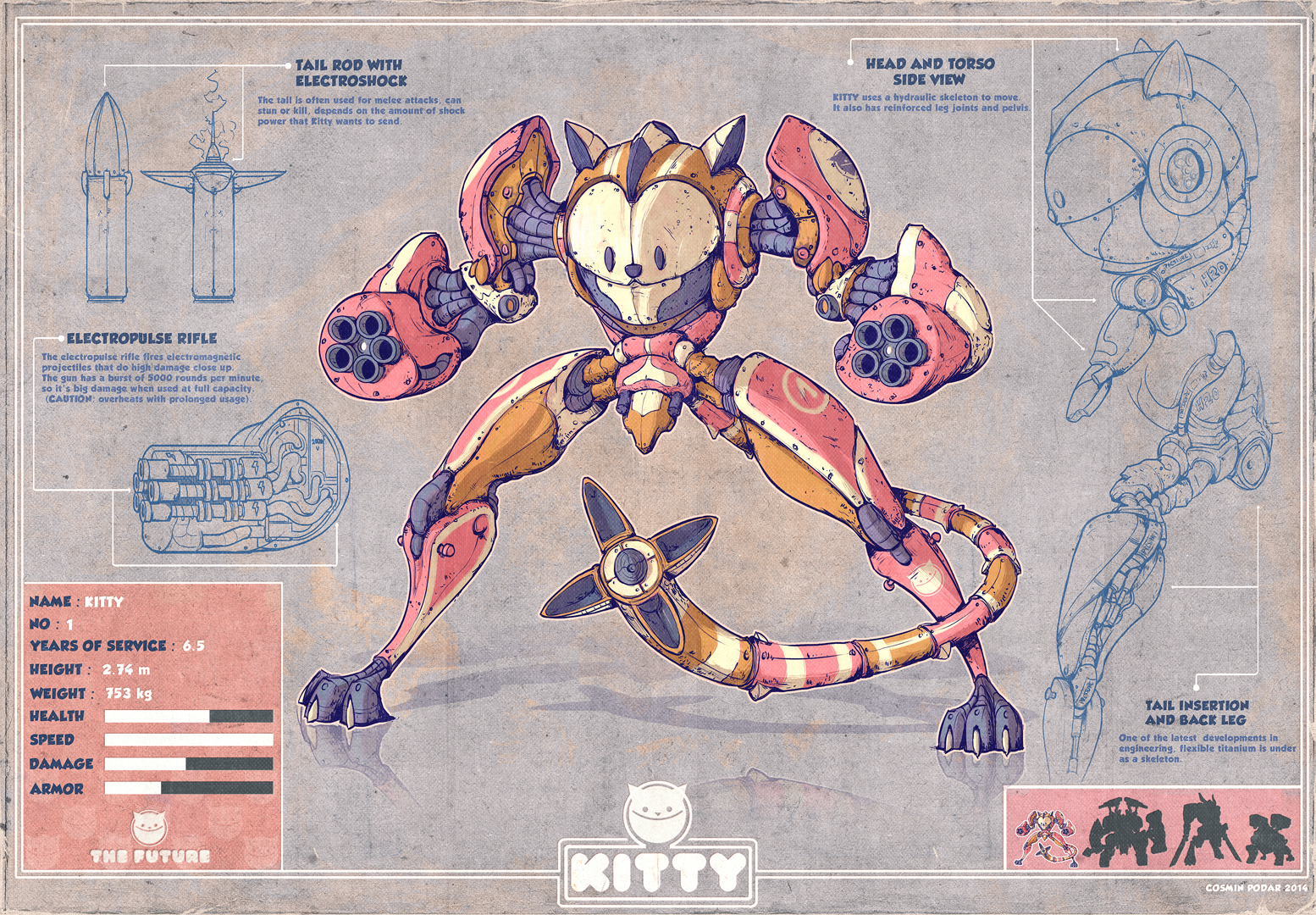 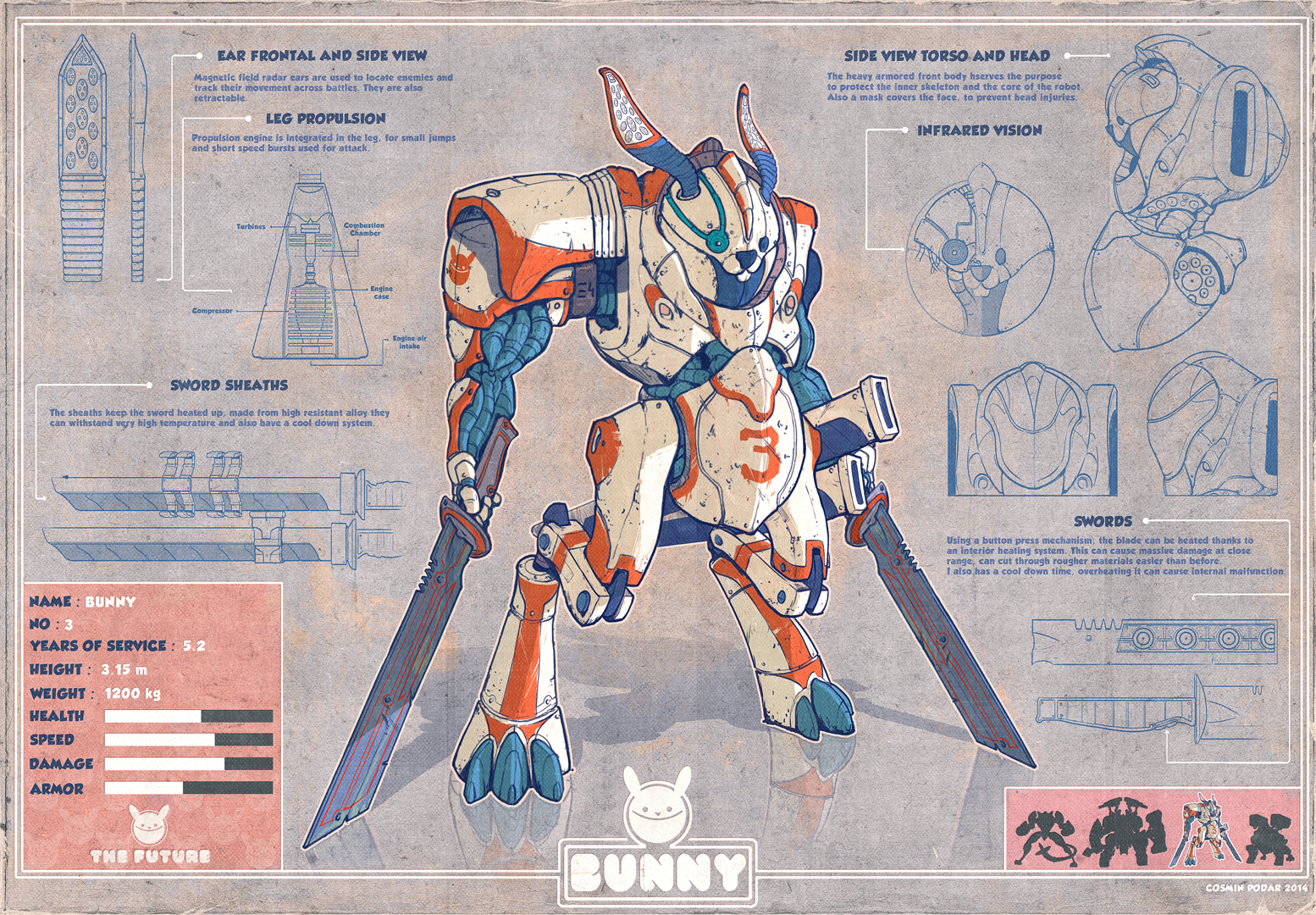 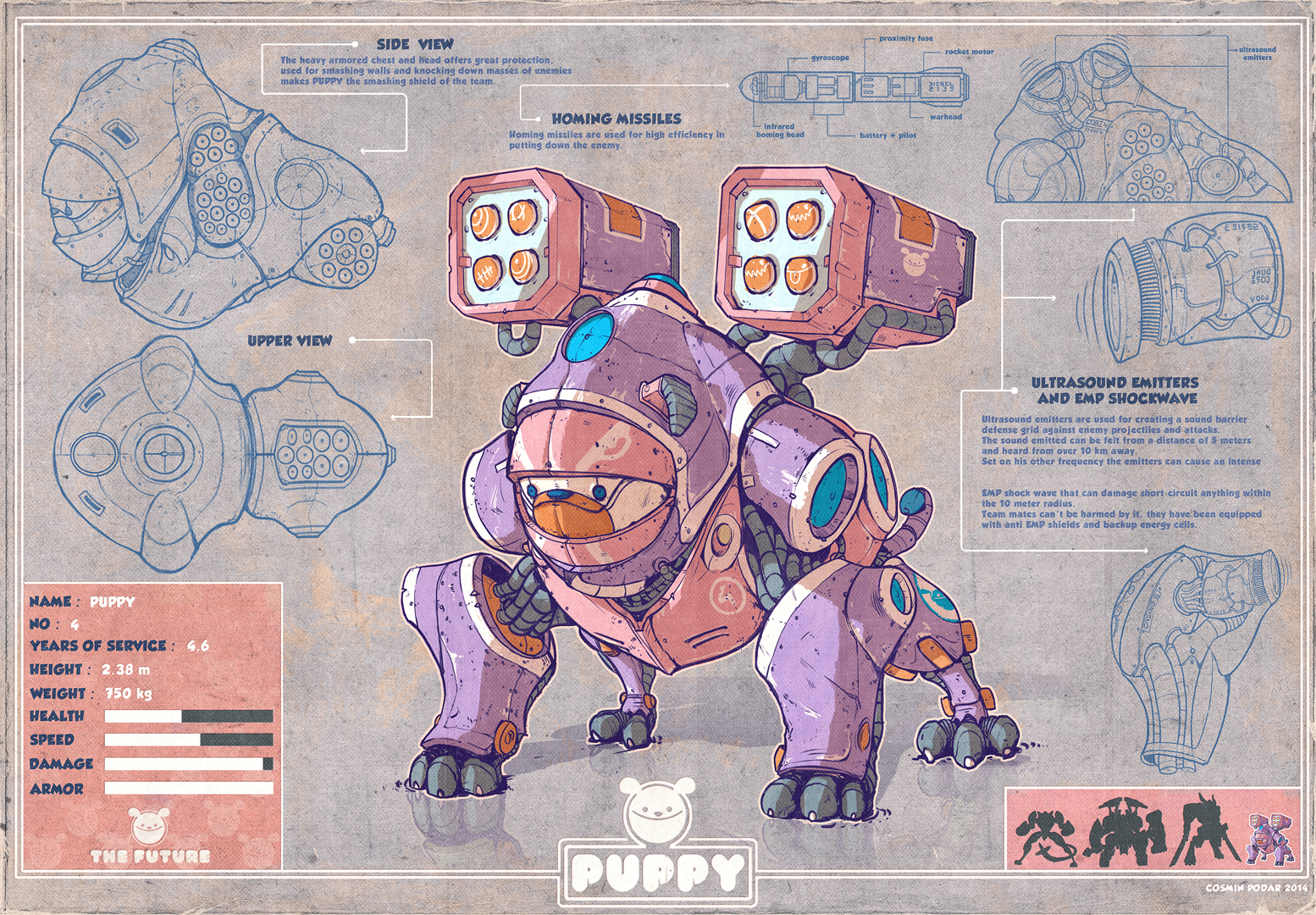 This is a new project of mine, based on designing new robot characters that are cute and deadly :). As a short introduction and some back story to it, P.A.W. Elite is an infiltration team of robots, each member having different abilities that can complete the team and make it as efficient as possible.
Professor Minamoto, Japanese scientist and robotics expert, designed the robots initially as companions for kids between 5 and 12 years of age, in the mid 2100's. They were supposed to be A.I. robots that could replace some of the tasks that parents couldn't do, like taking them to school, to the park and so on.
The professor was hired by the military to move this project into another direction, of course the kid companion idea was dropped, never came out, millions of dollars spent in prototyping them and marketing was lost. The army paid some of the money for compensation, but not enough, just to cover up all this scandal and shut some people up. So this is how P.A.W. Elite was born after ten years of work and research, unique prototypes were made, each one different and special in his own way.
Kitty was the first made, she was ''born'' in 2163, she is supposed to be the fastest gun in the east. Just for the record, the skeleton of these robots is made out of benditanium, basically titanium that is very malleable and incredibly resilient to gun fire and explosions.
Teddy was in development as well, so after five months he was ready for action. He is heavier than Kitty, a robust robot that could easily crush you in close combat. He also has mounted machine guns on the back, acting independently from the body, a lethal weapon for the ones that aren't engaged in close combat with him.
Bunny was later made, as he was meant to be the captain of the team, his A.I. brain is more intelligent than the other ones, has more tactical experience implemented and team management as well. He is the basic samurai warrior, fast and deadly with the swords. He can also detect invisible enemies, so there is basically no peril that could compromise the team.
Puppy was the last model made, he has a more jolly and childish personality than the others. When he doesn't blow everything up with his missile launchers, you can roughly see him as a ''little doggy''. Be careful how you pet him, his ultrasound emitters can literally blow your brains out.
In the end I think this is the perfect team, the cat's slickness and cunning, with the brute bashing bully from your neighborhood, samurai whits and deadliness and a cute killer bundle of joy.

So I hope you had some fun reading this, I wish you all the best and thanks for taking the time!

So great man, the characters, the history, really is extremely wonderful!! i like so much of them!!

i like your way to explore the robot and characters. it is really nice to see something with a lot of variation element. and, the animal concept is really great i think.