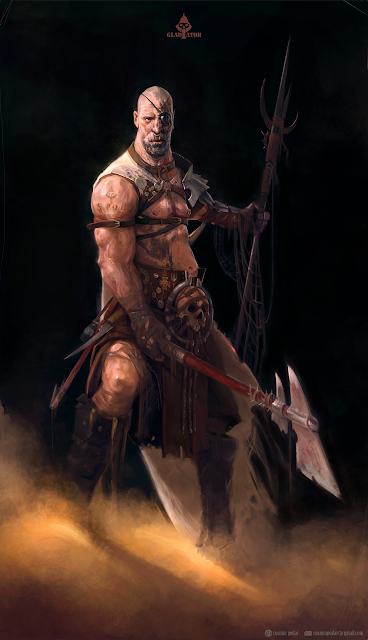 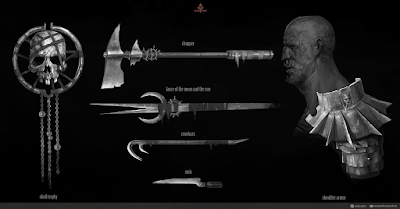 I always loved the post apocalypse world, especially the Mad Max universe and with this last movie I really felt that the characters were nicely made, lots of personality and tremendous amount of detail. Because I also like hand made stuff ( even though I am poor at making them myself ), I really felt that I can make something a bit different from the roman gladiator but still anchored in reality.

Small story: He is a though SOB, big muscular and also a skilled combatant. I imagine him being ex military or something, hired for combat or entertainment in the arenas of the wasteland.
He crafts his own weapons and after each victory he likes to take trophies from his enemies, and sometimes he takes a bit more also he is very selfish and egocentric,
believing that only the sun and the moon is above him.

A strong believer in fair combat and survival of the fittest, he is also inspired a lot by the ancient roman history, the soldiers were very disciplined and hard,
compared to the barbarians they fought and conquered.

The world he lives in now, resembles a lot those times, were civilization was scarce, the only difference being that the current civilization was destroyed by mankind's greed for power. Gladiator....was a self proclamation of this nomad warrior, who constantly fights for his survival.
Posted by Cosmin Podar at 12/29/2016 06:07:00 PM

Thanks for helpful article!
https://cgiflythrough.com

Many Thanks for the shared this informative and interesting post with me.
Defly Game
DogeMiner2 Game Free
Yohoho io game
Kids gamesbx2
Surviv io
GamesBX free